Ifugao in A Nutshell; The Descendants of Kabunyan

Ifugao is one of the six provinces with the city of Baguio and Tabuk that compose the Cordillera Administrative Region (CAR). The province is named after the ethnolinguistic group called Ifugao.

Originally, the people called themselves Ipugo, stressed in the last syllable, which is derived from Pugaw, meaning Earthworld. Ipugo, altered to Ifugao by outsiders, literally means earth man, mortal or human being, as distinguished from the deities and spirits that inhabit the different worlds in the Ifugao system of worship. These are Kabunyan (Skyworld), Dalom (Underworld), Daya (Western World), Lagud (Eastern World) and Pugaw (Earthworld). According to their oral tradition embodied in their myths, the Ifugao are descendants of beings from Kabunyan. Their first ancestors were Wigan and Bugan who had left Kabunyan and went down to live in Pah-adan, a place in Daya.

They later migrated to Pugaw where the soil was fertile and wild deer abounded. Near the west bank of the Ibulao River from across the Lagawe Valley, the couple set up the first human settlement and called the place Kiyangan.

A theory says that the Ifugao are descendants of a migrating people who had come to Ifugao from the western part of what is now Mt. Province, specifically Bauko and Tadian.

This theory is based on the following findings:

With an area of 2,518 sq. kms., Ifugao province is made up of eleven municipalities. These are Aguinaldo, Asipulo, Banaue, Hingyon, Hungduan, Kiangan, Lamut, Lista, Mayoyao and Tinoc, with Lagawe as the capital.

The province may be divided into three distinct geographic regions based on climate and terrain. The eastern region, made up of Lamut and Lista, is a low-lying plateau with a warm climate. The middle region, with elevation of 1000 feet to 3000 above sea level, has a moderate climate. This is the area where extensive rice terraces are located.

The western and northern sections of the province, with elevation ranging from 3000 to over 6000 feet as above sea level, are the most rugged parts of the Cordillera mountain chain that stretches from Apayao in the north to Benguet in the south. This area of Ifugao has a cool climate especially in the months of November through February. This forested region is the headwater of the three large tributaries of the Magat River that irrigates the fields in Isabela and Quirino.

As of 1995, the population of Ifugao was 153,340 with a growth rate of 2.23%. Both figures could have been higher except that there is the steady out migration of hundreds of families to Quirino, Isabela, Nueva Vizcaya and Baguio City starting in the early 1960s on to the 1970s and 1980s. The outward population movements were prompted by the need and desire of the migrating families to improve their living condition. Starting in the mid-1700s, the Spaniards continually conducted military actions against the disparate Ifugao groups to subjugate them. But even when they increased their military forces with the establishment of thecommandancia in 1889 with headquarters in Kiangan, they failed to conquer fierce resistance from the Ifugao and in the vicinities of the Spanish garrisons.

The retaliatory attacks of the Ifugaos against the Spaniards ultimately resulted in the weakening of the Spanish forces in Ifugao. This, in turn, led to the early withdrawal of Spain from Ifugao in 1897, even before the coming of the Americans to the place in 1902.

The Americans, after years of military campaigns coupled with a policy of attraction, finally pacified the Ifugao. Created as a sub-province under Mt. Province in 1905, Ifugao remained in such status until 1966.

With the enactment of R.A. 4695 in June of that year, the old Mt. Province was divided into four provinces, namely: Benguet, Ifugao, Kalinga-Apayao and Mt. Province, the last being constituted of the former sub-province of Bontoc. (Kalinga and Apayao became separate provinces in 1996.)

The economy of the province is agriculture based, with the municipalities of Lamut and Lista leading in the production of rice and corn. Rice production in the terraces is hardly enough to sustain the need for the staple in the other towns, so the people engage in other income producing activities. Vegetable raising is a major industry in the Asipulo-Kiangan area, while woodcarving is the main home industry in Banaue and Hungduan.

Basketry and cloth weaving are done in several places. Much of the cash income of many people comes from employment in local and national government offices. Cooperatives of various types are now making a big impact in the economic development of the province. 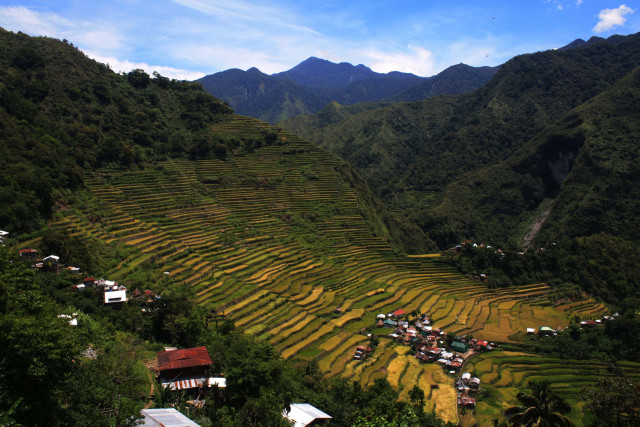 A relaxing view of Batad Rice Terraces located at Ifugao

For many year, Ifugao, particularly Banaue, has been one of the popular tourist destinations in the Philippines. In recent years, some of the towns, like Hungduan and Kiangan, began taking serious steps to develop and promote culture-based and environment-friendly tourism in their own areas.

This article was originally written by Manuel Dulawan, the Officer-in-Charge of the Ifugao Academy and has authored two books on Ifugaos and the Ifugao culture.